From the 16th – 18th of August we attended the 3rd African Conference on Emerging Infectious Diseases and Biosecurity in Accra, Ghana. 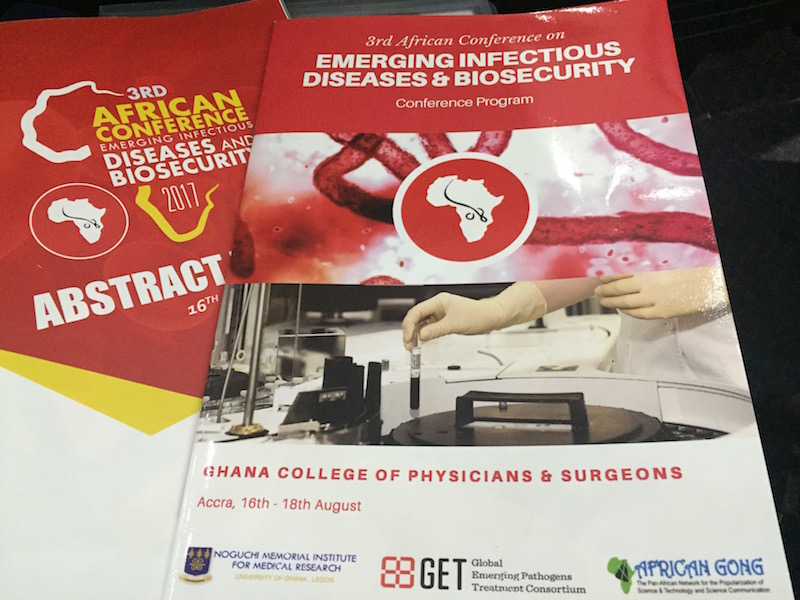 The conference was hosted by the Global Emerging Pathogens Treatment (GET) Consortium. Attendees included representatives from the biotechnology, biosecurity, and biobanking industries; health economists; bioethicists; engineers; government representatives from various African and European nations; NGOs; journalists; and more. The First Lady of Ghana Mrs. Rebecca Akufo-Addo was also in attendance.

Dotun Bobadoye of GET Africa, DRASA’s MD Niniola Soleye, and João Cossa of the Mozambique Ministry of Science and Technology

GET’s Chairman Professor Kwadwo Koram opened the conference saying, “this is a conference on action.” And that theme continued throughout the 3 days. It was clear that we weren’t just there to talk, but to take action and make changes to ensure that African nations prioritize preparedness and put the necessary steps in place to prevent and contain outbreaks (instead of always waiting for foreign aid and assistance).

GET’s Principal Investigator Professor Akin Abayomi shared the top 3 things he believes affects the ability of most African countries to respond to outbreaks or public health events of international concern:

Prof. Abayomi recapped Ebola in Nigeria saying, “12,000 Nigerians travel every day. If Lagos had exploded, we would have been in serious trouble. When are we Africans going to be our own response?”

DRASA’s Managing Director Niniola Soleye spoke further about this on day 3. The topic of her presentation was “Building Resilience to Emerging Infectious Diseases in African Communities through Knowledge Sharing and Training” and the panel discussion that followed was on the importance of science communication, education, and training in preventing outbreaks.

Some of our favorite quotes from the conference were:

Interesting facts and comments on the 2014 – 2016 Ebola outbreak that were shared included:

It was a wonderful 3 days. We learned a lot, made some great connections, and were inspired by the great efforts of so many people working to keep the continent safe from public health threats.